Do You Have the Magic?

Do you use manual therapy in your rehabilitative healthcare practice? Do your patients sing the praises of your magical hands? Or do you perhaps worry that you don't have that special magic touch and wish that you did?

Well, Harry Potter, whether you believe that your hands are magical or not, we are here to share a secret with you: You actually do not need magic hands for your manual therapy practice!

DermoNeuroModulating, or -tion (DNM), is a structured, interactive approach to manual therapy that considers the nervous system of the patient from skin cell to sense of self. Techniques are slow, light, kind, intelligent, responsive and effective. The positioning of limbs and trunk affects deeper nerve trunks (by shortening and widening their container), and is combined with skin stretch directed toward cutaneous fields of nerves that branch outward into the skin (which may draw neural structure further through its container). It is prudent to remember that manual handling of a patient's physicality is only a small part of developing a complete therapeutic context for change - while optional, it can also be optimal.

DNM will not replace everything therapists have already learned, but it may provide a new conceptual container for it.

Below is a brief introductory video on Dermoneuromodulation with Diane Jacobs:

If that sounds interesting and you would like to learn more about dermoneuromodulation and pain science with Diane Jacobs, check out Embodia's continuing education physiotherapy course Dermoneuromodulating: Treating the Patient as if Their Nervous System Really Mattered.

As we mentioned above, dermoneuromodulation is based on neurodynamics. It's important to realize there are two definitions for neurodynamics:

Now to digress a little: This blog was first based on a question that was posed in the dermoneuromodulation Facebook group.

Here is the (paraphrased) question

Q: DNM can help with muscle hypotonicity.  DNM only works with cutaneous nerves, which do not have motor branches to the underlying muscles.  I have not found a concrete explanation as to how affecting the cutaneous nerves reduces hypertension in a muscle. So, what is the mechanism?

In order to answer the question, Diane Jacobs first provided context and even got a little philosophical. Her answer is a bit of a brain-full (like a mouthful but for your brain).

Follow along as much as you can or want to, and find the answer to the question at the end of this blog.

All content that follows below was written by Diane Jacobs

Peripheral Nerves Are Named in Favour of Their Motor Function

From one perspective, this makes cutaneous nerves easier to learn from an anatomy text.

From another perspective, it can present a cognitive chasm - how does handling affect motor output? Pain output?

For manual therapists, it means that to understand how our handling affects the nerves/nervous system we have to delve a lot deeper into the body of knowledge and are forced to be more rational.

For more on rationality, check out this wonderful YouTube video with Rafe Kelley and John Vervaeke, at about the 51-minute mark.

Rafe Kelley & John Vervaeke, Building an Ecology of Practices for Self- Transcendence:

Back to the Highway (and to the Question)

But then we have exit 73. As soon as you take that exit, you find yourself on a "new" highway with a "new" name, maybe "Lake Road" or something. It's a different branch of the same big nerve, but it goes away from muscle instead of into it, doesn't contain any motor neurons, only autonomic motor neurons and sensory neurons, and it goes to the skin.

I want to rename this highway branch, "Vista View Road." It doesn't go to a lake, it goes out to the skin, and skin is open to the world. To the environment.

These nerves pick up on everything out there. Ambient temperature, breezes, contact with the planet through the soles of the feet.

Furthermore one can argue that special senses also have "skin" or at least, specialized membrane containing receptive neurons for picking up on light levels, different noises, different scents in the air depending on what season we are in, humidity levels, all sorts of inputs that are mainly subliminal and are handled efficiently by very old predictive processing systems in our central nervous system. But I digress.

And I got carried away with the sensory function in cutaneous nerves. Lest we forget, they also contain numerous autonomic neurons, which are sympathetic, which are motor, and which regulate all the enormous vascular function of the skin organ, which contains 10 times more blood supply than needed for its own metabolic function, acting as a reservoir for emergencies and a thermodynamic regulatory organ for keeping body temperature within the narrow optimal homeostatic range necessary for life processes in mammals (of which we are a kind). I learned all this from reading Gray's Anatomy. And I digressed again.

Back to the original answer

With me so far?

Now, imagine that you can put your hand on "Lake Road", and physically move it, because it's embedded right into the underneath side of the skin! It's got its own fascicle inside the tubular Highway 315! When you move the skin, you move that fascicle (physically) all the way up Highway 315 (or at least a long way up it), and even, in fact (sensorially), all the way up to the brain.

This is an important manual therapy concept to get: imagine pulling a string through a tube.

Imagine the tube (which is the peripheral nerve itself, containing lots of strings) goes all the way to the spinal cord.

Imagine the string you pull is easy enough to pull because it embeds right into the skin (organ), which you can know (for a fact!) that you can get your hand directly on and move.

Plus, you are activating all kinds of computational low-threshold mechanoreceptors right at the skin organ surface. Of course, the brain will know that someone is touching its organism, and how.

This might be where Descartes got off track thinking there were specific "pain" neurons going to the brain. The thick heavily myelinated low-threshold A-beta mechanoreceptive neurons in skin certainly do - they go up the dorsal columns of the spinal cord to dorsal column nuclei in the medulla, synapse there, cross over, synapse again in the thalamus, and end up in the primary somatosensory cortex with high fidelity. Nociceptive-capable, high-threshold neurons end in the dorsal horn of the spinal cord. Well, unless they are A-delta nociceptive neurons, which are a bit thicker and faster with a bit more myelination, seem to have a lot more sensory-discriminative capacity, and are usually well and quickly inhibited. See link.

And I digressed yet again. (Furthermore, "Lake Road" has multiple turnoffs that go straight to the skin organ's surface, called rami, each inside its own little tube called a skin ligament!)

Yes. I took pictures of them. With special permission.

Specifically, these are cutaneous rami of the lateral cutaneous nerve of the forearm (highlighted with a black felt marker).

See Nash 2004 for a description of skin ligaments. 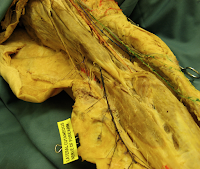 Anatomically things are a lot more complex of course, fascicles anastomose and diverge right inside the nerve, and nerves themselves diverge and anastomose inside the plexuses from which they differentiate, etc. Plus, all these fascicles have blood vessels going into them from accompanying arteries and out of them into accompanying veins and all this attached vasculature will also be moved a little.

To see images of all this anastomosing business, plus neurodynamic elongation of nerve fascicles, go here.

And, (we hope) moving said vasculature can mechanically affect, for the better (we hope!), said vascular function within the nerve (intraneural blood flow). Particularly if there is local pain, which may be a tunnel issue secondary to insufficient drainage/consequent intraneural engorgement/entrapment.

But be all that as it may, Lundborg showed that fascicles can slide a bit to afford nerve elongation (sort of like a telescope can elongate by its inner parts sliding outward).

And Butler and Shacklock (and whoever came along before they did) took these ideas and pain science at the time (late 80's, early 90's) and developed nerve sliding etc. as a treatment approach.

Neither one of them worried much about cutaneous nerves, however, which is where I picked up the ideas and have included neurodynamics in treatment approaches to the skin, i.e., moving of cutaneous nerves and their multiple rami.

Gad, I wrote all that stuff but didn't get around to answering the question, did I?

I have not found a concrete explanation as to how affecting the cutaneous nerves reduces hypertension in a muscle. So, what is the mechanism? The only mechanism that has a ton of research to back it up is "non-specific effects", more specifically, top-down "descending modulation" by the brain, of the spinal cord. The brain's usual order of business is to inhibit gross spinal cord reflexive behaviour. It's like the spinal cord thinks its job is to make everything big and the brain's job is to say, now now, not so big, and not right now. Remember the spinal cord can elicit withdrawal reflex in response to nociceptive input before the brain even registers a problem (i.e., be very protective. Maybe even over-protective.) (Plus the spinal cord came along earlier than the rest of the CNS so it tries to play the seniority card I suspect.)

Anyway, 50 years after Melzack and Wall's paper on gate control theory, a paper came out in 2015 that afforded it some direct evidence. (Foster et al 2015, see link) so there is now a shred of support for a bit of bottom-up inhibition of nociception as well.

I added a bit later on in the thread that is my hunch (can't find any definitive reference for it yet) about why muscle hypertonicity occurs, even though it irritates the heck out of peripheral nerves that may be getting squeezed on in the process: 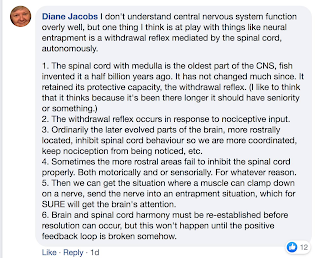 If you would like to take a shorter course with Diane, Making Connections: Manual Therapy For The Nervous System In Pain, is always a great place to start! 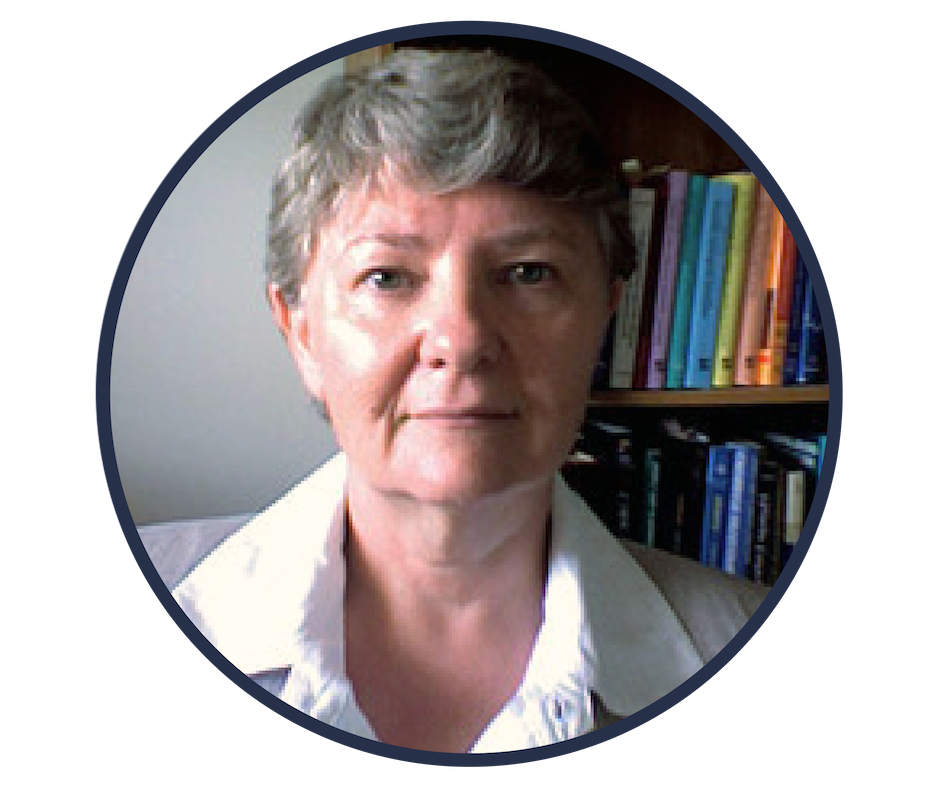 Diane Jacobs graduated from U. Sask with a physiotherapy diploma in 1971, started using manual therapy in1983, and went solo in 1994. She has been interested in pain science and working cutaneous nerves into the manual therapy story since 1998; she calls this ‘dermoneuromodulating’. She helped to found the Canadian Physiotherapy Association Pain Science Division in 2009 and served on it until 2014. In 2016 she published a book, DermoNeuroModulating. Her time is spent treating, writing, teaching internationally, and presenting.